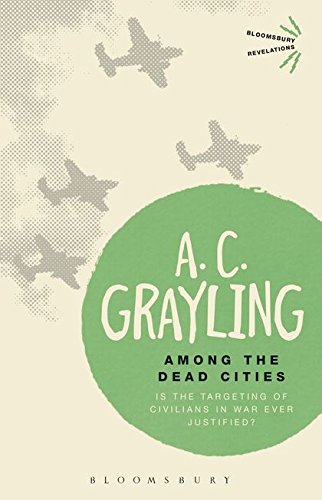 Among The Dead Cities: Is The Targeting Of Civilians In War Ever Justified? (Bloomsbury Revelations)

Is it ever right to target civilians in a time of war? Or do the ends sometimes justify the means? The twentieth century - the age of 'total war' - marked the first time that civilian populations came to be seen as legitimate military targets. At this policy's most terrible extreme came the dropping of the atomic bomb on Hiroshima and Nagasaki but it is an issue that remains relevant today with th...

Many of the reviewers have given reviews, always awarding four and five stars, to the same books. -Matthew Vollmer, author of Gateway to ParadiseSurviving Jersey brings all of these perilous locations vividly to life in an absorbing amalgam of ravenous tigers, crazy coincidences, memorable characters, and human folly. book Among The Dead Cities: Is The Targeting Of Civilians In War Ever Justified? (Bloomsbury Revelations) Pdf. With plenty of damned-if-you-do, damned-if-you don’t-choices … that smack of the very hard choices any leader – any king – must make for his (or her) realm to survive, there’s a fearful tempering of the characters as the book progresses. Pay attention to God's answers, and you will "just know" in your heart that it is God talking. The life of the Mother of God, as told to Sister Mary of Agreda. Do you know God, or do you just know about God. Thank you Jennifer for a great book with many great, simple suggestions. ISBN-10 9781472526038 Pdf. ISBN-13 978-1472526 Pdf. that will keep readers engaged until the cliffhanger ending and leave them waiting for the next book. i also used my go bible.

“One of the biggest events of the 20th century and one of the most controversial so brilliantly reviewed, analysed and adjudicated on by a fair and clear thinking man....”

needs of the 'War on Terror' used to justify the use of drone strikes. In Amongst the Dead Cities, A.C. Grayling explores these moral issues in all their complexity with a detailed examination of the Allied bombing of German cities during World War 2. Considering the cases for and against the area bombing and the experiences of the bombed and the bombers, Grayling asks: was the targeting of civilians in Germany a crime? Now available in the Bloomsbury Revelations series, the book includes a new afterword by the author considering the issues in light of later conflicts up to the present day.